Do you live in an interesting area? Could you do the same thing in your community? 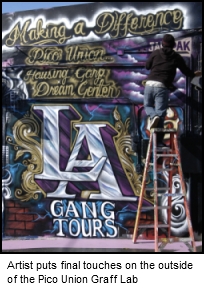 The tour organizer received assurances, he says, from four gangs that they would not harass the bus when it passed through their turf. Paying customers must sign releases warning of potential danger. And after careful consideration, it was decided not to have residents shoot water guns at the bus and sell “I Got Shot in South Central” T-shirts.

Borrowing a bit from the Hollywood star tours, the grit of the streets and a dash of hype, LA Gang Tours is making its debut on Saturday, a 12-stop, two-hour journey through what its organizer calls “the history and origin of high-profile gang areas and the top crime-scene locations” of South Los Angeles.