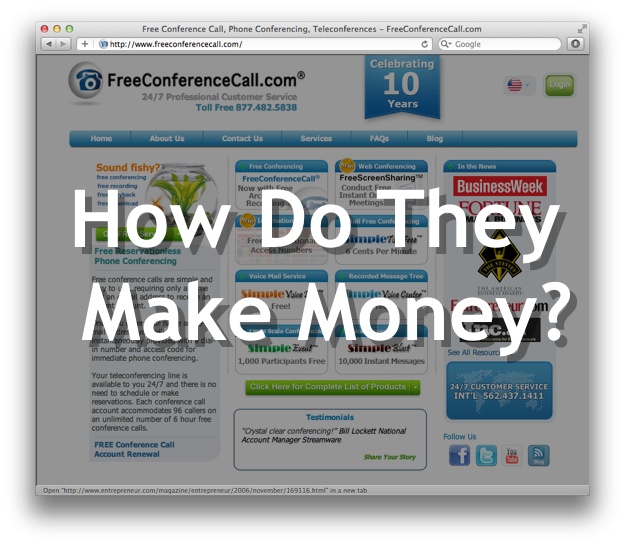 FeeFighters.com took a look at how companies like FreeConferenceCall.com make money. Surprisingly, it’s not through up-selling to their premium, for-pay, product. It’s via an “outdated” telecommunication regulation from the telecommunications act of 1996, that’s still on the books, which requires small rural telephone companies to charge larger telephone companies a “termination fee” to access their lines.

It used to be that you’d pay long distance rates depending on where you called, and you’d pay more to call those locations. In the past decade or so, with the onset of cellphones and flat-rate long distance plans, the phone companies just assumed that only a small percentage of people would actually call those numbers. The fees that AT&T and the larger companies pay the small companies are 10-20x more than the normal fees – termination rates range from .3 cents to 20 cents. The rural companies get a great deal – the more calls that they take, the more money they make.

If they can get businesses with a lot of incoming calls, like conference calling companies, they could make a lot of money. So they started cutting deals with conference call companies, phonesex lines, etc. If the termination fee at a particular location was 8 cents, they could pay a conference bridge company 4 cents per minute and still make 4 cents on the call. Conference calling is relatively cheap to setup, so these companies are able to offer free service to customers like us and still make 4 cents per minute. It’s all about using more minutes.