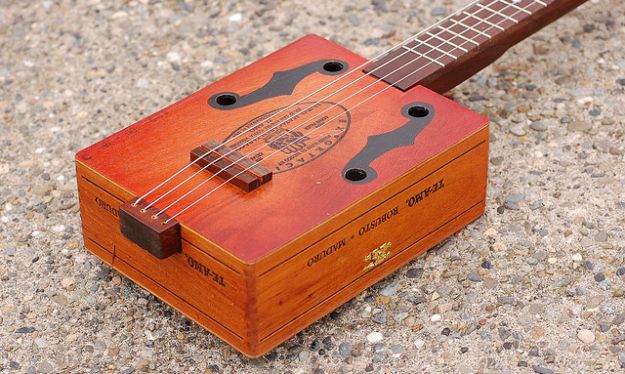 When most people think of a surgeon, they do not imagine a man putting together a unique cigar box guitar. However, that is exactly who Kirk Withrow is.

A patient with a sinus infection introduced him to the instrument during his residency at the University of Alabama Birmingham about 11 years ago and gave him his cigar box guitar. He’s been hooked ever since.

In the past decade, he has created dozens of cigar box guitars, most of them 3-string, acoustic and electric, though the latter takes more time, he says. He has recorded albums and occasionally plays shows and festivals, though he claims he’s not that great and reckons the appeal lies in watching some guy a play homemade instrument.

Cigar box guitars and fiddles, along with other homemade instruments, such as jugs and washboards, figured heavily in the rise of American jug bands and blues in the early 20th century, since most performers could not afford manufactured instruments. The Great Depression continued the trend when manufactured instruments were beyond the means of most, but cigar boxes, broom handles and a few wires from the screen door were available to mostly everyone.

The modern revival is a likely tangent of the DIY culture, especially among fans of Delta blues and Appalachian music, which evoke a tinny sound that comes through on acoustic cigar box guitars. Online communities such as Cigar Box Nation host discussions among enthusiasts, whose passion extends to other homemade instruments such as ukeleles, diddley bows, mandolins, even violins.