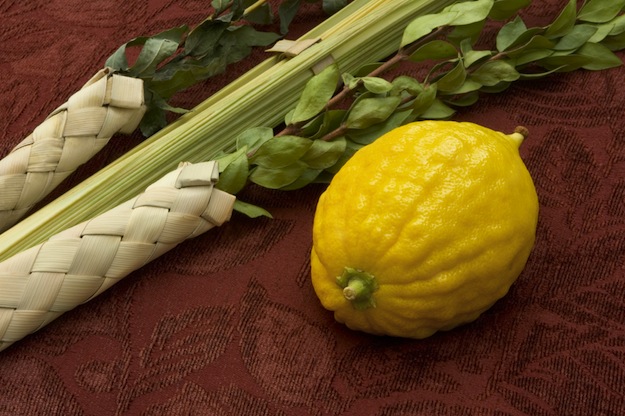 If you think farmers only grow things like apples, and oranges and peaches, you have no idea. Tablet Magazine (A New Read on Jewish Life) has up an interesting article about a farmer in California central valley — not far from me — who grows etrogs.

An etrog is a yellow citron used by Jews during their week-long holiday of Sukkot.

On the first day gather gather fruit from majestic trees – palm fronds, boughs from leafy trees, and willows that grow by the streams. Then celebrate with joy before the Lord your God for seven days. Leviticus 23:40

Since etrogs are used during Jewish religious rites, the fruit must be kosher. In order for a citron to be kosher, it must be pure, neither grafted nor bred with any other species, therefore only a few traditional varieties are used. To prevent grafting, the plantations must be under strict rabbinical supervision.

Because of this, they sell for substantially more than the $0.20 farmers might get for a lemon. According to the article, each egrot sells for a bit less than $40 each, and occasionally as much as $150!

In the fall of 1980, Kirkpatrick got a call from Yisroel Weisberger, “an Orthodox Jewish boy who worked in a Judaicia store in Brooklyn,” the farmer said. Weisberger, who also held a part-time job in a customs house handling etrog imports from Israel, was interested in finding a way to grow the fruit in America. Each Sukkot, Jews are commanded to shake the arba minim, or four species – the etrog and lulav, as well as willow and myrtle branches – to celebrate the holiday. (These days, a set of the four typically sells for $40, with the etrog the most expensive component, but can cost up to $150, depending on where it’s from. Most etrogs are imported from Israel, Italy, and Morocco.) Producing and selling them here had the potential to be a lucrative business.

But first Weisberger needed a farmer. He had heard of Kirkpatrick, a well-established citrus farmer-back then he was chairman of the Citrus Research Board-and hoped Kirkpatrick might refer him to a suitable grower. They spoke for an hour, and Kirkpatrick grew fascinated by the history and culture of the etrog, which he knew little about. “I had read about them in a five-volume set about citrus fruit,” he recalled, but he’d never seen one. Over the course of the conversation, Kirkpatrick became “convinced by the attractive-sounding value of the fruit,” as he put it. “You’ve already found your man,” he said when Weisberger asked him for some names. “And from there it was onward and upwards.”

Read the rest at Tablet Magazine.