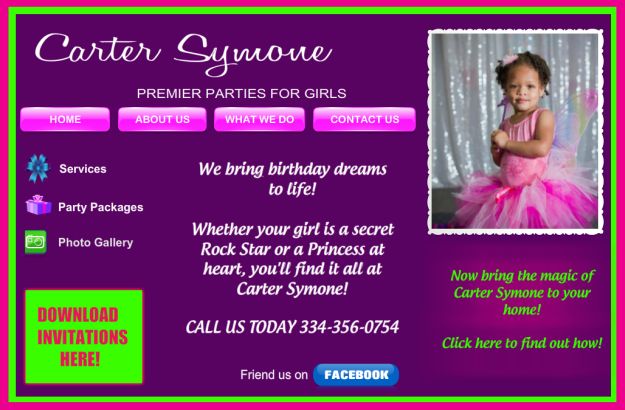 It all started just over a year ago when Mia Mothershed couldn’t find the right place for her daughter’s birthday party. Now she is the proud owner of Carter Symone Premier Parties for Girls, reports Montgomery Advertiser.

Mia Mothershed now conducts at least three parties a week that feature more than a dozen themes including princess, rock star, spa and others.

Mothershed said she was lying in bed when she was inspired to open a site for the big day.

After consulting the Montgomery Small Business Incubator about her business plan, she and the festival’s owner worked out a deal on the 2,500-square foot area.

Renovations were made over several months by the couple. The result is an appealing party headquarters with ballroom and stage, birthday cake and snack room, seating for parents, a nail-painting area, changing and dress-up rooms, and two flat-screen televisions. The walls also are painted to appeal to girls and their friends ages 3 to 16.

“We renovated the space and made the walls pink and gray,” Mia Mothershed said. “We installed kitchen appliances and made the runway and stage. It took two months.”