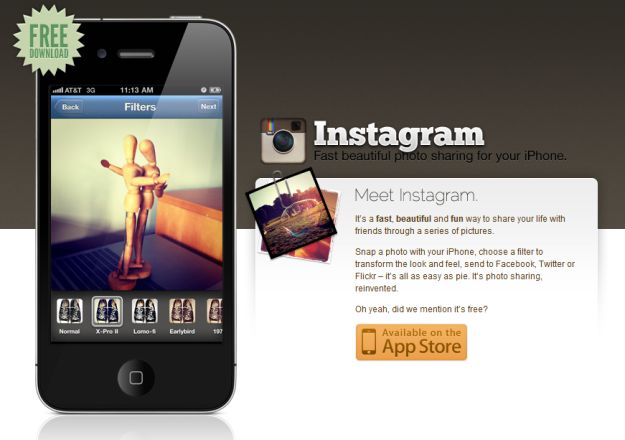 In the late 90s it was companies like Shutterfly that ruled the Internet photo industry. Today it is services like Photobucket, Flicr, or Picasa that seem to be taking up the biggest chunk. According to Bloomburg Businessweek, a new company, Instagram, is beginning to get the attention of the people now. With their iPhone app, people are finding out just how fun it can be to click, edit, and upload photos to their favorite social networks.

The software—accounts are free of charge—allows members to snap pictures with their phones and add visual effects that give images the classic look of photographs captured on traditional film and developed with chemicals. Then users can post their shots to their Instagram accounts or to social networks such as Facebook and Twitter. They can also comment on other people’s pictures and browse collections of prolific photographers. “You post, and a community gives you instant feedback,” says Scott Beale, an Instagram user and founder of Web hosting company Laughing Squid. “It’s a quick way of seeing what everyone is up to with minimal effort.”

Instagram represents a new kind of Web startup: one whose skyrocketing popularity, thanks to platforms such as Apple’s (AAPL) App Store, has largely preceded its evolution into a real company with accouterments like financing, office space, and a permanent Web address. Despite its rapid growth, Instagram has all of four employees; its twentysomething co-founders, Kevin Systrom and Mike Krieger, work with two colleagues in a former conference room adorned with vintage Polaroid Land cameras in a San Francisco office once home to Twitter. They say they haven’t created a single PowerPoint slide explaining their money-making plans (which are hazy, but will apparently involve advertising).