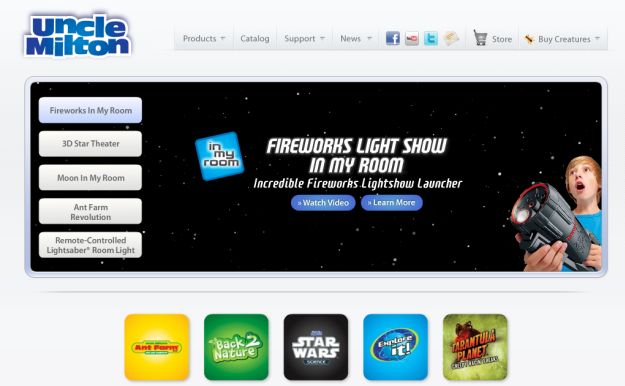 Uncle Milton’s Ant Farm was the craze of the 1950s and the company and the toy that spawned a frenzy and still sold in the millions was highlighted in September at Moonlight at the Ranch V: “Shake, Rattle & Roll!” A display of the two most famous Miltons of the 1950s – comic Berle and toy entrepreneur Levine – drew much attention and comment.

Berle, AKA The Thief of Badgags who dominated the early days of television died at 93 in 2002. Levine, AKA Uncle Milton Industries, Inc. passed away in January in Thousand Oaks at the age of 97.

But the company Levine co-founded is still going strong in Westlake Village and, from the comments of Moonlighters, his contribution of the Ant Farm will never be forgotten – or replicated – if its inclusion on lists of the 100 greatest toys of all time is any indication.

It’s more than collecting: most of Uncle Milton’s products have an added ingredient that only the purchaser can provide, brain power to either construct the item or use it to learn about a variety of subjects – from tarantulas and rocket design/trajectories/aerodynamics of Boba Fett to lunar phases demonstrated by Moon in My Moon and yes, domestic issues when it comes to the inhabitants of Ant Farm and teaching kids to appreciate and respect nature.