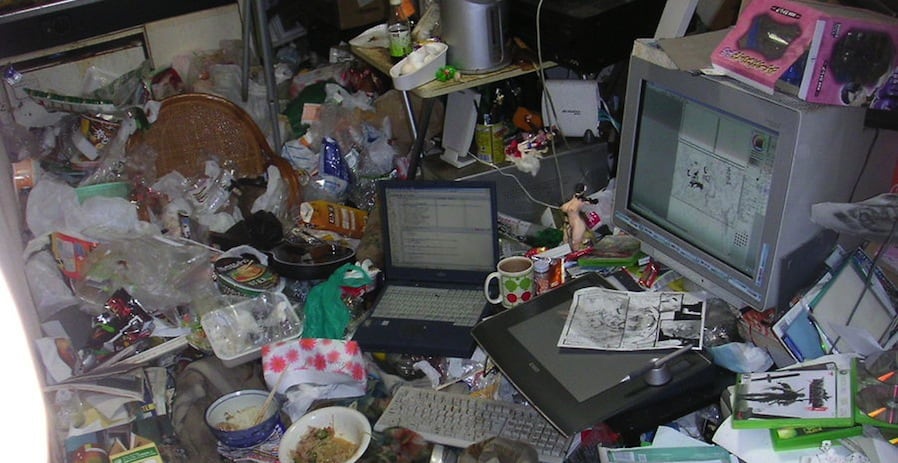 Share this with your significant other, boss or mom, and show them that your desk really isn’t that bad.

Why does he keep a aquarium full of mud on his desk?

Is that a cat?

He does all of his business by telephone, paper and VHS tape.

For all his bad habits, including looking at other people’s filthy desks on the internet, he still tries to eat healthy yogurt.

I think he lost his chair under there. Oh yes, there it is, next to the sink.

Look at the size of that computer compared to the monitor!

Steve had a sinking suspicion that someone else was using his computer while he was asleep. He didn’t have many clues, just five Sprite cans.

Obviously a student of serious art; note the Mona Lisa.

I give this one three stars for the backlighting effect.

Yes, he drinks a lot of beer. Yes, he’s a slob. But his taste in lamps is magnificent.

He likes to stay properly hydrated.

His mouse doesn’t match his keyboard.

His clean desk looks a little out of place, don’t you think?

Was there an earthquake?

All things considered, this one isn’t very bad. But you should never leave the two top drawers of a filing cabinet open, you risk it falling over and creating a mess like in the previous picture.

His rolling chair doesn’t get to roll much.

What’s in that plastic bag under his bed?

Three coffee cups and a banana peel?! What kind of madness is this?

Is that a cowboy hat, or a half crushed milk jug on a plate? I can’t tell.

I count at least five calculators.

What, you’ve never seen so many model airplanes in one room?

I wonder what’s locked behind that padlock?

Lame. Who uses “White Out” anymore?

Is that a third dog behind the chair?

She loves her dogs.

I thought that computers were supposed to reduce our dependence on paper.

What is this, a dungeon?

There’s history in this room. And a typewriter.

Ah how sweet. Someone sent her flowers. They should have sent a cleaning crew.

He still takes time to work out with his kettlebell.

Yep, I was right. This is another view of number three: the chair without a seat.

At least she knows where to find her lotions.

Is that a baked potato?

This picture is so rich. The monitor has been reduced from 19″ to 15″ by sticky notes. The motivational picture on the desk says: “Perfection.” There are at least two different pizza boxes from two different restaurants, and the April 12, 2010 issue of Time magazine with Steve Jobs on the cover is on the desk.

Who keeps ketchup next to their computer?