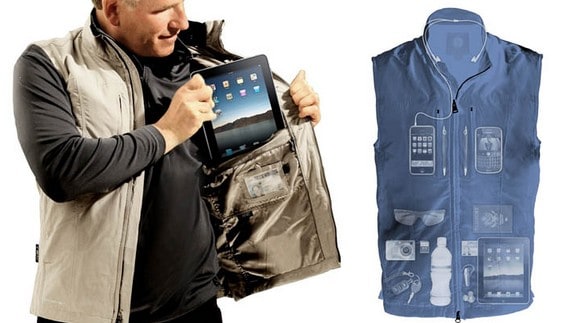 The Wall Street Journal reports that Chuck Pretto couldn’t figure out how to carry around his new iPad. So he decided to wear it.

After ordering Apple Inc.’s new multimedia tablet last month, the 52-year-old property manager realized it might weigh down his briefcase. He didn’t have another bag or carrier to cradle the 9.7-inch, 1.5-pound device. For a time, Pretto considered getting a “man purse” for it. Then he learned about iPad-compatible vests on a blog and immediately bought one.

“People can’t believe this darn thing will fit inside my pocket,” says Pretto, who now wears the $100 vest every day. The San Diego resident has since bought other iPad-friendly apparel, including a second vest and a windbreaker from travel-clothing maker Scottevest Inc.

Pretto’s carrying conundrum isn’t unique. After Apple started selling its tablet in April, early adapters were stumped on how to easily hold and transport the glass-screen gadget.

IPad’s unusual size–far bigger than a 3.5-inch iPhone but much smaller than most laptops–has ramped up opportunities for enterprising individuals and companies.

In Fairbanks, Alaska, stay-at-home mom Kate Clark created a white, feminine-hygiene-product-shaped iPad case called iMaxi as a play on the jokes that were made about the iPad name when it was first revealed in January. Orders flew in. Other companies are marketing backpacks shaped like Star Wars robot C-3PO as iPad bags, while still others are developing industrial-strength iron-on pockets to hold the gadget.

In some instances, entrepreneurs are rebranding existing products to suit the iPad. In January, Scottevest, the travel-clothing maker, began touting some of its existing multi-pocketed travel vests that can hold magazines, water bottles and a myriad of gadgets as iPad compatible.

The Sun Valley, Idaho, company–which counts Apple co-founder Steve Wozniak as a member of its advisory board–markets iPad wear starting from $75, and has since hired additional employees and more than doubled production.

Photos by The Wall Street Journal.