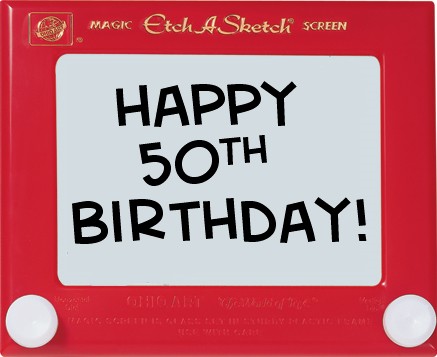 According to Wired magazine, the technology behind this children’s toy is both simple and complex. Simple, in that an internal stylus is used, manipulated by turning horizontal and vertical knobs to “etch a sketch” onto a glass window coated with aluminum powder.

Complex, because the Etch a Sketch employs a fairly sophisticated pulley system that operates the orthogonal rails that move the stylus around when the knobs are turned. The stylus etches a black line into the powder-coated window to create the drawing.

Along with the aluminum powder, the guts of the toy include a lot of tiny styrene beads that help the powder flow evenly when the sketch is being erased (by shaking), recoating the screen for the next drawing. As for how the aluminum powder sticks to the window, well, it pretty much sticks to everything.

Arthur Granjean, a Frenchman, was the Etch a Sketch’s inventor (he called it L’Ecran Magique, or “The Magic Screen”). After failing to get some of the bigger toy companies to bite, he sold his invention to the Ohio Art Company, which has manufactured it ever since.

It’s safe to say that neither Granjean nor Ohio Art could have envisioned the toy’s ever-lasting appeal or the virtuosic skill with which some artists have manipulated it. We didn’t believe some of these images, either, until we saw this video of Etch A Sketch artist George Vlosich in action.