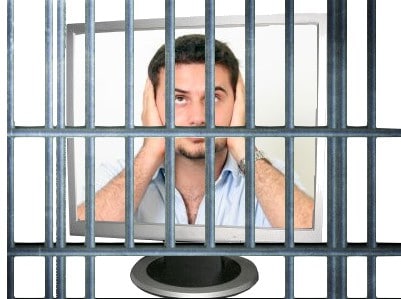 California Web impostors beware: You may soon be breaking the law, even if you aren’t one of the perpetrators targeted by the state’s “e-personation” bill, Bloomberg Businessweek reports.

The measure, which is awaiting Governor Arnold Schwarzenegger’s signature, carries fines of as much as $1,000 and a year in jail for anyone who poses as another person online with malicious intent. The law, which would take effect on Jan. 1, would also allow victims to file civil suits.

People other than criminals may be affected by the legislation. Pranksters, writers of satire, and even activists living outside the state could be subject to legal action, some lawyers say. Fake accounts in the names of celebrities and politicians abound on microblogging site Twitter and social network Facebook.

The law applies to anyone who credibly impersonates “for purposes of harming, intimidating, threatening, or defrauding another person,” according to the language of the bill, whose author is state Senator Joe Simitian, a Democrat whose district includes parts of Silicon Valley.