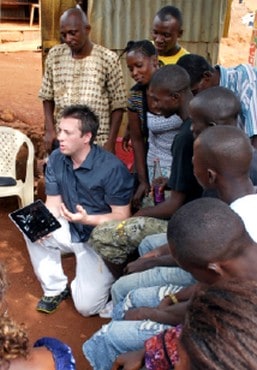 The Salt Lake Tribune reports that during his travels in Africa exploring the impact of microlending on business start-ups, Jason Fairbourne noticed something strange. When an entrepreneur became successful selling a particular product, say tomatoes, many others would mimic that person’s business. Soon the local market was flooded with tomatoes, and failed tomato vendors.

Out of this, the part-time Brigham Young University faculty member hatched his concept of “microfranchising” to address pitfalls associated with the microlending movement. His idea was to put ready-made businesses in the hands of people with no entrepreneurial skills in impoverished communities that lack business-support infrastructure.

Fairbourne’s solution was to investigate a local market, identify products, craft brand identities, then package businesses in an easy-to-replicate model that could be operated without an MBA, or even basic literacy in some cases.

“Microfranchising takes away the creative and entrepreneurial requirement and gives these microbusiness people a product, provides systems to manage their business, so it helps these fledgling microbusinesses start quicker, grow faster, and brings greater income,” Todd Manwaring, director of BYU’s Ballard Center of Economic Self-Reliance, said.

Franchising has worked in the United States, Fairbourne noted, helping countless nonentrepreneurial business owners on the path to success. Today, franchising accounts for $1 trillion in sales, supporting 8 million U.S. jobs, according to one of his presentations.

Photo by The Salt Lake Tribune.