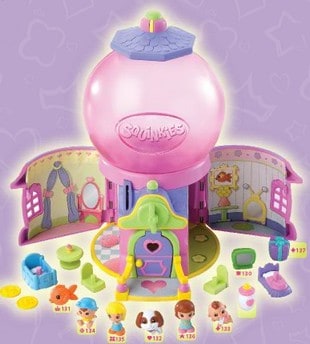 The New York Times is reporting that midway through last year, as analysts tried to predict where the economy was going, toy maker Bill Nichols decided he had the answer. He bet that the economy would still be so shaky this holiday season that a bargain-priced plastic toy would take off.

With the help of “mommy bloggers” and a tepid economy, Mr. Nichols turned the squishy toys, named Squinkies, into a fad.

Walmart.com has been sold out of them for more than a week, and stores nationwide are sold out or limiting how many Squinkies each person can buy.

Like Beanie Babies or Zhu Zhu Pets, the toys are collectible – the hundreds of characters include a Lhasa apso dog and a tiny bride – but they are much cheaper, selling for $10 for a 16-pack.

Nichols’s toy story has defied the odds at a tough time for small manufacturers. His company, Blip Toys, is a 16-person operation in Minnetonka, Minn. It faces competition from giants like Mattel and Hasbro with multimillion-dollar advertising budgets.

Big retailers, like Toys “R” Us, Target and Wal-Mart, all want exclusive toys to offer. Independent retailers who might take a chance on smaller manufacturers have all but disappeared.