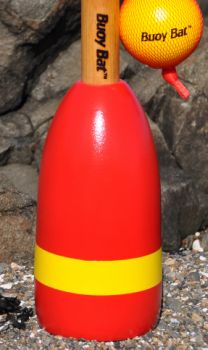 To most people, a washed-up lobster buoy, a dog with a tennis ball, a young child and a sunny afternoon would probably be just another vacation day in Maine. But for entrepreneur Bill Page it was an afternoon that would forever change his life.

Page said the idea percolated throughout the rest of the vacation, but upon returning home both the buoy and the idea were shelved. Until two years later in 2010.

After turning his own bat handles and perfecting the design, he contracted the job to an in-state source. â€œIt would take me too long to do it myself,â€ he said. He also contracts out the painting to a local professional cabinet painter.

Page prefers to keep his colors simple, but his options open in case he changes his mind.

â€œWe also sell some to people unpainted, if they want to have a unique or personal color choice,â€ he said.

The remainder of the finishing and packaging are done in-house â€” or rather, in-basement and in-living room.