Edward Linacre, a student at Melbourne, Australia’s Swinburne University. has won this year’s James Dyson Award, with his “Airdrop Irrigation” system. The system harvest water from the air and delivers it directly to the roots of plants by mimicking a trick from the Namib beetle.

Minute water droplets from the fog gather on its wings; there the droplets stick to hydrophilic bumps, which are surrounded by waxy, hydrophobic troughs. Droplets accumulate and coalesce until their combined weight overcomes the water’s electrostatic attraction to the bumps as well as any opposing force of the wind; in a ten-mile-an-hour breeze, such a droplet would stick to the wing until it grows to roughly two-tenths of an inch in diameter; at that point it would roll down the beetle’s back to its mouth parts. 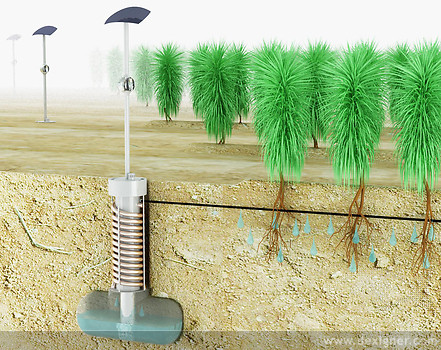 The James Dyson Award is a high profile, international student design competition currently running in eighteen countries. Run by the James Dyson Foundation, the award aims to “encourage the next generation of design engineers to be creative, challenge and invent.”