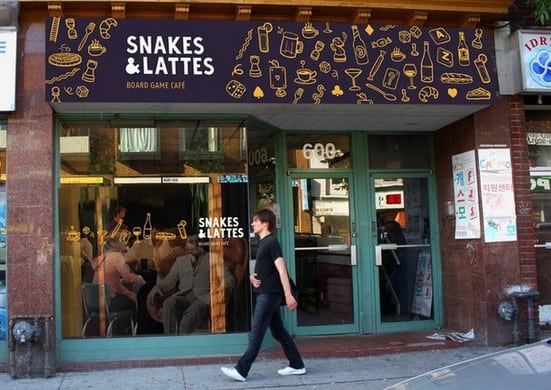 It’s not uncommon to see board games on display at restaurants and cafÃ©s, but they’re typically used to prop up laptops at least as often as to provide hands-on entertainment.

According to trendspotter Springwise, Toronto’s Snakes & Lattes serves up not just coffee but also 1,500 board games available for the playing.

Billed as “the first board game cafÃ© in Toronto,” Snakes & Lattes dispenses with the free wifi; rather, it encourages its patrons to play games instead.

For CAD 5 per person per visit, visitors can choose from the cafÃ©’s diverse collection, which includes staples like Monopoly as well as lesser-known offerings including Jumanji and Fireball Island, according to a report on BlogTO.

Taking the concept even further, the shop’s baristas serve as strategic advisors as well, dispensing instructions and tips for play along with the frothy beverages. Coming soon, reportedly, are themed nights, youth-focused initiatives and a rental system to let customers play the games at home.

Given the ubiquity of wifi-enabled coffee houses around the world, unplugging and focusing instead on low-tech games is an interesting premise that could win the loyalty of legions of mass-mingling consumers. It’s similar, in some ways, to Meet Joe’s offline and personal approach to social networking. One to watch!