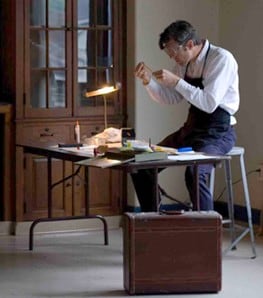 According to Fast Company, David Rees may well be the world’s first and only artisanal pencil sharpener.

“It’s as real as artisanal cheese-making or artisanal honey production or artisanal anything else that’s part of this movement.” Unlike his electric counterparts, Rees promises the “care and attention” your No. 2s deserve.

For $15, he’ll whittle one to a fine point, and mail it back with a baggie of shavings and a certificate of authenticity. To date, roughly 80 lead-heads with a well-honed sense of irony have used the service.

“I’m hoping I get some repeat customers — people who need touch-ups or resharpening,” he adds, noting that, over time, one No. 2 could yield revenue north of $100.