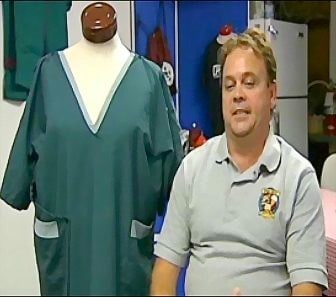 “People constantly complained about the hospital gown,” said Harley Richards, who came up with what he calls the EZ-Gown, a robe he patented which doesn’t have ties, instead uses plastic snaps that close the gown for privacy.

The idea was born out of frustration from patients and people who like him have worked in the medical field for decades.

“They were always having their back side showing,” Richards said referring to patients, whom he said felt they needed more privacy from their gowns.

It took Richards almost four years to get a patent. Then he had to find a place to make his gowns.

A good fit for USNER Products, Inc, said Jim Slonecki, the owner of a small sewing factory in North Charleston.

Richards said his creation is picking up steam here in the Lowcountry, but he is hoping it gets some national attention.

“You take five or six hospitals that would pick up on a deal and go with it. We could probably employ 16, maybe 20 people,” Richards said.

“If you’re making 50,000 [gowns] you can be much more cost effective and you’ll be much more productive so you can sell it at a much more competitive price,” said Slonecki, who feels like being competitive is key in an industry barely surviving because most of it has gone overseas.

Aside from tapping into private hospitals, Slonecki and Richards goal is to snatch up a government contract. They’ve been working with politicians at the federal level with the hope they can help land a major deal.