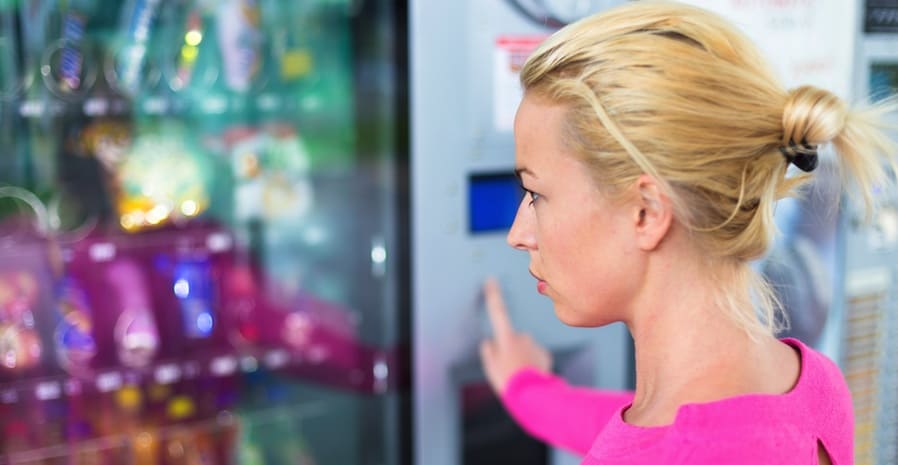 What kind of vending machines are out there? Most of the ones you’re thinking of are the ones that dispense soda and junk food. But as you’ve probably noticed over the past few years, people are going on a health kick. And this health kick provides an exciting opportunity for the motivated entrepreneur within the vending machine sector. Below, you’ll find information about two vending machine franchises that offer you a chance to monetize interest in eating healthier and more responsibly.

Urban Vendor
In business since 2010, the Urban Vendor franchise has grown into a major force in the healthy vending machine industry. Their flagship product is the Karma Box, which is a state-of-the-art vending machine. It allows customers to pay with more than crumbled dollars and spare change, as customers can also use their credit cards and debit cards to complete transitions. In addition to this, the vending machine has been manufactured with the environment in mind, which is sure to please many who will be frequenting the vending machines.

The minimum startup cost for getting off the ground with Urban Vendor and a Karma Box is in the neighborhood of $10,000, which isn’t cheap. However, as you’ve seen already, there a lot of benefits that accompany those startup costs.

Again, like the Karma Box from Urban Vendor, the products offered by these machines cater to the health-conscious crowd. But, as we’ve already discussed, this is a great thing. People’s interest in healthier eating is only likely to expand, and the popularity of these vending machines – and others like it – will only continue to grow.

The minimum startup cost for Healthier 4U Vending is $20,000, but it can be scaled above that depending upon the level of investment that you’re willing to make. That might seem expensive, but one thing to factor into your analysis is the fact that they do not require their franchisees to pay franchise fees – and they provide you with a workable business model.

How to Create a Successful Franchise Business Plan